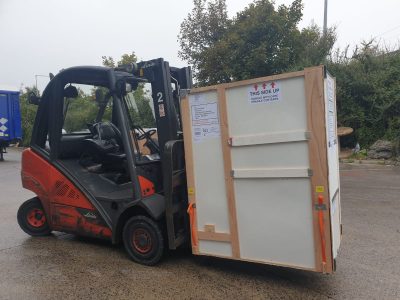 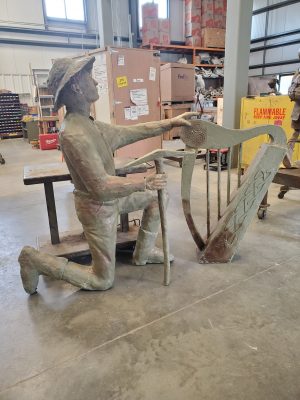 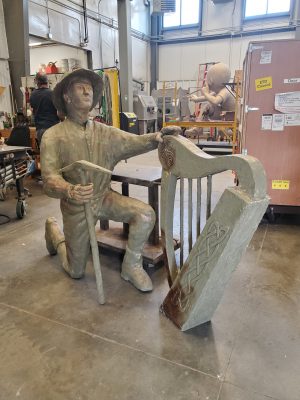 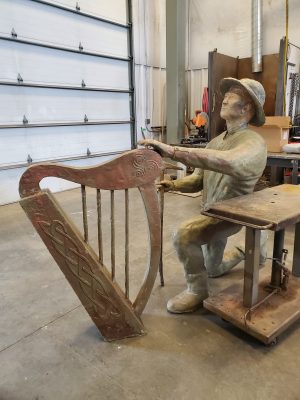 From Co. Wicklow, Ireland to the Rocky Mountains of Colorado, the centerpiece for the Miners Memorial that will be placed in Evergreen Cemetery, Leadville, Colorado has arrived safely in Loveland, CO. Affectionately known as Liam O’Sullivan, named after the son of sculptor Terry Brennan from Dublin, Ireland “Liam” and the surname O’Sullivan comes from Co. Cork where many of the miners currently buried the “Pauper Section” of Evergreen cemetery originated from.

His journey began on October 1, 2021, where he flew across the Irish Sea to Heathrow, England and was then flown to Los Angeles, CA. He was then transported to Aurora, CO and then by land to Loveland, CO where he will spend the winter months in the hands of Bronze Services of Loveland. Here, he will be cast into a new bronzed likeness, and he will be placed in his final resting place in the Irish Memorial site in Leadville, where the official unveiling will take place in the fall of 2022. The site will include glass panels that will have the names of the Miners that are buried there.

Miners, who immigrated from Ireland in the late 1800s were not so lucky to have such a grandiose passage. There were packed on ships also known as coffin ships where there was little or no food and limited water. Most likely these miners arrived through ports such as ‘Ellis Island, NY or New Orleans, LA’. They then made their trek to Colorado over mountainous terrain in sometimes bitter cold weather conditions to seek a better life. Many died from sickness or starvation on the ships, and many died over the Rocky Mountains on their way to Leadville, CO. Many made it to Leadville and still the average age of the bodies buried are no more that 23 years old. Women and kids also died trying to survive.

Fundraising events have been a top priority for this project. With grants from the Irish Government to Galas hosted by Noel Hickey from the Celtic on Market, Irish Pub, Denver, CO., and continuous efforts from the Irish Network Colorado we have raised over $100K. However, we still have a long way to go and need many more donations. If you or your company would like to donate to this great cause, please go to the following link https://www.paypal.com/donate/?cmd=_s-xclick&hosted_button_id=VTG6F4EL7H5X4 and make a donation or go to www.irishnetworkco.com and go to the “Donate” button on the main page.

This project is also quite famous in both Ireland and in the U.S, having been featured in the media on both sides of the Atlantic.  RTE, (Ireland’s National Television and Radio Broadcaster), TG4 Irish Television, along with local Colorado Radio and Television stations.

The Irish Network of Colorado wishes to thank its sponsors, donors, and all involved in this project for allowing us to bring the project thus far. We will look forward to seeing you at the unveiling next fall! Stay tuned for more information.